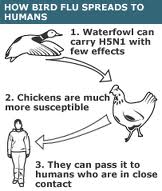 The outbreak started on 27th December 2013 in the village of Yijue, Guizhou, where 8.500 birds died and 23.067 chickens were culled to prevent the disease from spreading. The outbreak is ongoing and the causes are at the moment unknown. There will be weekly report to the OIE from the Chinese Authorities. All safety measures were applied, such as quarantine, movement control inside the country, screening, zoning and disinfection of infected premises/establishment.

The bird flu in China is far from being under control.

The Chinese Authorities confirmed a case of H7N9 in a sample taken from a live animal in a poultry market in the Guangdong province, where the sell of poultry is now stopped.

In the region there was a cluster of human cases. A 47 year-old man, poultry worker from Foshan, and a 71 year-old man are in critical conditions. The WHO confirmed also two cases in December and an 80 year-old man died on 26 December 2013, but in different regions from Guangdong